City breaks
B
onjour!
It’s coming on to days 3 and 4 in Paris and it feels like time is flying by as our days are filled with many exciting activities. Paris is such a big city and it’s nearly impossible to see everything. This time around we made sure to see Versailles palace and get stunning views of Paris from the Eiffel Tower observation deck.

Getting there:
Situated about 18 km west of Paris, you’ll need to take an RER C train to get there. The train ride takes roughly 1 hour and costs 7,10€ per person. Be sure to take the correct direction of the RER (as they go in 3 different directions). You’ll want to take the one going to the station Versailles Château Rive Gauche (Javel, Pont du Garigliano, Issy…).

One thing I really love to do when traveling throughout Europe is to visit castles and palaces. You could say I’ve seen quite a few but Versailles is just different than the rest- it’s on ANOTHER LEVEL!
The Palace of Versailles is decked in royalty and painstaking detail. So royal, in fact, that Marie Antoinette used the grounds as a personal escape. Many historical events took place at the Palace of Versailles such as the beginning of the French Revolution and the signing of the Treaty of Versailles, officially ending World War 1.
The Palace took 40 years to construct, houses over 700 rooms, 6,000 paintings and cost King Louis XIV a pretty penny- $2 billion to be exact.

The apartments of Louis XV’s daughters

If you’re in Paris for more than a few days you should definitely make the trip to Versailles, you will not regret it! The town of Versailles is also a nice day break from the bustling city life.

Funny story… I actually never had any intention of going to the top floor of the Eiffel Tower. My family had kept talking about their plans but I had always told them I would not be joining (I’m both claustrophobic and afraid of heights). But they were steadfast in persuading me otherwise and kept suggesting to “do it for the blog”.
This was moments before the elevator ride up…

Let me remind you that the observation deck at the top of the tower is 276 m (906 ft) above the ground. Alas, I bit my tongue, squeezed my sisters hand and made the journey to the top… for the blog.
It turns out it was not nearly as bad or scary as I was making it seem in my head. The stunning panoramic views were well worth it. Tip: (this applies to most things in Paris) I suggest reserving a ticket ahead of time to skip the queue 😉

What are some of your favorite castles/palaces? Would you go to the top of the Eiffel Tower for the views? Let me know in the comments.
Bissous <3
explore travel vacation
0
0
Marissa Cecot-Petersen 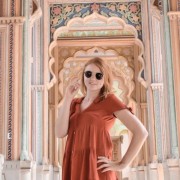 An American living and working in Dusseldorf, Germany. If you couldn't tell already, I spend most of my free time cooking, travelling or writing about either of the two. Thanks for stopping by!

Where we are now